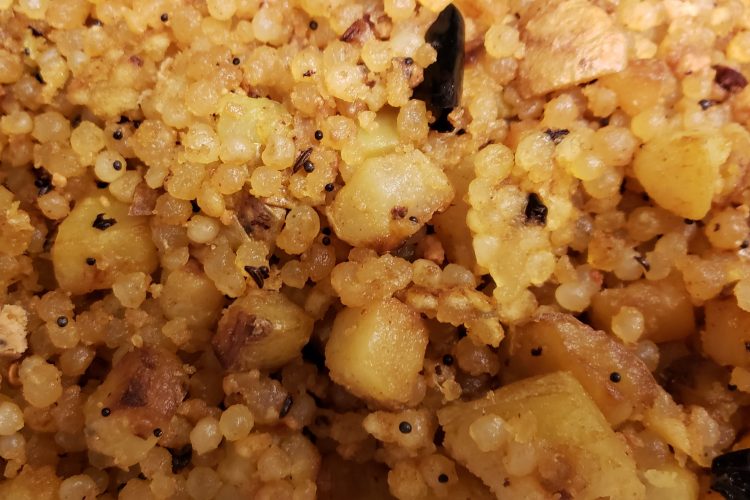 Tapioca pearls (sabudana), which are derived from the cassava plant, are a staple in the Indian/Asian/Brazilian diet. They are sometimes confused with Sagu which is derived from the pith of tropical palm trees. Sagu and tapioca pearls resemble one another as they both appear as small, white, opaque pearls that become translucent when cooked. Think of them as brothers from another mother. However, the two are not always interchangeable in recipes as Sagu requires a longer cooking time.

Cassava or Manioc is very resistant to insect attack due to its high levels of cyanide. However, all the cyanide is removed during processing. Because it’s easy to grow and transport, it is inexpensive. Both Sagu and tapioca are extremely high in carbohydrates and aid in weight gain. In the locales where poverty is rampant, it is an important food source.

So, if you are looking for food that helps pack on the pounds, either tapioca or Sagu is a good choice. Having said that, they are delicious when cooked. They are generally used to make sweet dishes like puddings or cakes. Brazil uses cassava flour to make their famous cheese bread. India uses tapioca pearls for making savory dishes that are especially popular during religious fasts. The following recipe is one such example.

1.Soak tapioca pearls for at least 8 hours to overnight at room temperature in a covered vessel. Ensure the water is exactly at the same level as the pearls of tapioca (see picture below). Otherwise, the pearls will stick instead of being separate and fluffy when hydrated.

2. Before you begin cooking, confirm that the pearls of tapioca have a split down the middle and are soft when you pinch one between your fingers.

3. Place 2 tablespoons of neutral-tasting cooking oil in a non-stick skillet and set it on medium-high. Add both the mustard seeds and the whole cumin seeds to the oil. When the seeds sizzle (cumin) and pop (mustard), add the turmeric powder and the curry leaves. and mix well.

5. Lastly, add the softened tapioca and mix well. Cover the pan for 4-5 minutes and set the heat to low.

6. Uncover the pan and stir well. Cover and cook for another 5-7 minutes or until the tapioca turns translucent.

7. If using crushed, roasted peanuts instead of peanut butter, add them now.

8. Serve warm or hot. It is delicious with plain yogurt mixed in and/or a side of Indian pickle. Otherwise, squeeze a wedge of lemon or lime and enjoy.

Note: *These ingredients may be purchased at your local Indian grocer. For this reason, I have given you the name of the spice both in English and Hindi as that is the name (written phonetically in the English alphabet) you will find it under when you go shopping.

Spices impart specific flavors and aromas that enhance the overall flavor of the dish when used correctly. Moreover, they have a lot of health benefits. The list below specifies:

Kari Patta (curry leaves) – Very aromatic with a nutty aroma and pungent taste. Added last as a seasoning for oil. It burns easily. Used when making potato-based or lentil-based dishes. Only used in its whole form. Very popular in South Indian and Central Indian cuisine. Can be used in dry vegetarian cooking like Sabudana Khichdi and Upamas (a gruel made from cream of wheat); as a condiment over steamed lentil and rice cakes such as Dhoklas, Handvas, and Rava Idlis; and, as a seasoning for lentil soups like Sambar. Curry leaves are made into a paste and serve as an antiseptic for minor cuts and burns. They have antioxidant properties; help lower blood sugar; and, help relieve nausea and morning sickness.

Rye (mustard seed) – Whole spice tastes nutty; powdered form tastes sour and sharp. Used whole, it is one of the first spices to go into the oil. It must sizzle and pop in the oil to release its flavor. It is used to season oil in vegetarian cooking. It is used most often as a seasoning for pulses and potatoes. Some use it as a seasoning for yogurt in place of cumin. Its powdered form is an essential ingredient in making Kangi (a beet and carrot fermented drink). Rye is rich in selenium, a strong anti-inflammatory that helps reduce the severity of asthma attacks and certain symptoms of rheumatoid arthritis. Rye has strong antiseptic and antibacterial properties. Is rich in calcium, manganese, omega-3 fatty acids, iron, protein, and fiber.

Haldi (turmeric powder) – Bitter and earthy.Turmeric is added to the oil after all the other spices during the cooking process. Used in powder form or the fresh, grated or minced form to season vegetable and meat dishes. Made into a pickle and eaten fresh. Boiled using fresh minced or powdered into a Tisane. Powdered form mixed with yogurt and black pepper and consumed. Added in powdered form to milk and consumed to combat sickness like cold/flu/throat ache or help reduce swelling in the body. Mixed with oil (coconut or any neutral tasting oil) into a paste as a wound dressing to prevent infection and reduce swelling; or, rubbed onto the face as a skin cleanser. The main active ingredient is curcumin. CURCUMIN IS POORLY ABSORBED BY THE BODY AND MUST BE CONSUMED WITH BLACK PEPPER TO INCREASE ITS ABSORPTION BY 2000%. If you are using a turmeric supplement, make sure it contains piperine (BioPerine) to help with curcumin absorption, otherwise, the curcumin will just pass through your body and not be absorbed. Curcumin is fat-soluble, so it is good to eat turmeric with a fatty meal. Curcumin is a powerful anti-inflammatory and anti-oxidant. Fights Alzheimer’s and depression by increasing a growth hormone (BDNF) that increases the growth of new neurons. Helps minimize the risk of heart disease. Helps fight cancer.

Kali Mirch (black pepper) – Sharp, spicy. Whole peppercorns can be added early on when using them to season cooking oil. However, the ground form is only used toward the end of cooking. Black pepper is used as a condiment and a food preservative. It is one of the components of Garam Masala and Chaat Masala. It is used whole to season doughs like Mathi (savory crip wafer). It is most often ground and used as a condiment in cooked foods. The ground form, when mixed with honey is used to relieve coughs and sore throats and improve breathing. Whole peppercorns are brewed into a tisane to effect the same benefits. For best results, don’t buy it preground as you’ll lose not only flavor but also many health benefits. BLACK PEPPER INCREASES THE BIOAVAILABILITY of certain other nutrients, especially, but not limited to CURCUMIN, WHICH IS THE ACTIVE INGREDIENT OF TURMERIC. It helps reduce swelling; is a known antibacterial; it’s an anti-inflammatory; and, is high in antioxidants. It is a natural pain killer. In ancient times, it was used in conjunction with salt to preserve meat. It helps drain the sinuses.

Cayenne pepper – Spicy, sharp.Added directly after the dried whole spices either in its fresh or powdered form. When using its whole, dried form add it in the middle when seasoning the oil. Minced and mixed in Chaat and bean salads or used whole, as a condiment or in a mixed vegetable salad. Hot peppers are often eaten as pickles. Powdered, whole dried, or fresh minced chili peppers are used in cooking and added directly after the dried spices to season the cooking oil. Hot peppers have anti-bacterial; anti-fungal; anti-inflammatory; and, anti-oxidant properties. Helps fight the cold/flu; reduces joint pain; improves metabolism; promotes weight loss; and, are rich in vitamins A, B6, C, K1, and minerals like potassium and copper.

Sabudana (Tapioca pearls) – Chewy, bland. Used in different sizes from powders (for bread making), small pearls (puddings) to large pearls (used to make bubble tea). Tapioca is used for both sweet and savory dishes. It is also used as a thickening agent in sauces in place of corn starch. Sometimes confused with Sagu as they are similar in appearance both in their raw form and cooked form. Think of them as brothers from another mother. According to www.nutritionvalue.org, tapioca consists mostly of carbohydrates where 100g contains nearly 360 calories and 40 carbs. Sagu, although nearly the same in calories is even higher in carbs at 83 g per 100g of Sagu. Both tapioca and Sagu have very little nutrition otherwise. Although, both Sagu and tapioca are a good option for those that have allergies to gluten, or grain; and, both contain very little cholesterol, fat, or sodium.

Written by Anju Kapur of Anju’s Table. All content and images on this site are copyright protected. Please do not use any of my images without my permission. Should you wish to share this recipe on your site, please add a link to this post as the source.